Throughout my life, I have either annually vacationed on Martha’s Vineyard or lived there full-time for a spell or two.  It’s a magical place and I often find comfort and appreciate the simpler times and traditions that still exist  – especially those I can find during the hectic and high-traffic month of August.  One such event, is the annual Illumination Night “hosted” by the Martha’s Vineyard Campground Meeting Association (MVCMA).  This is a magical night where cottages shine brightly with silk Japanese and Chinese lanterns as well as some modern-day paper ones, and 200,000 visitors stroll around the centralized Tabernacle to the tunes of the Vineyard Haven Community Band.

Illumination Night, once such a close-to-the-vest secret that you would only know of its arrival when you saw MVCMA residents hanging lanterns in preparation for the night’s festivities, now seems to be annually held on the third Wednesday of August.  It originated 145 years ago as Governor’s Day – a day where the Island marked the visit of the Governor of Massachusetts.

The history of the Martha’s Vineyard Campground Association started back in 1835 as the first Island campmeeting (aka campground) called Wesleyan Grove.  Primarily Methodist congregations from off-Island would set up and live in “society tents” that encircled an open-air tabernacle.  In the 1860s and 1870s, the tents were replaced by “permanent” wooden (and often-referred to as gingerbread) cottages.  Today, only just over 300 remain from the almost 500 of the past.

Some homes and special lanterns and paper parasols I loved this year: 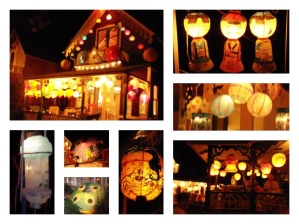 What I love and appreciate about this event is that despite the large crowds – yes, really over 200,000 are known visit on this night – there is still a sense of peace and almost a respite from the often hectic and quick pace we seem to experience today.  I love looking at the intricate designs and marvel at the lanterns that have survived sometimes 75 years (or longer) of Illumination Night festivities.  Not many of the silken lanterns, which were originally lit with candles, have survived the flames or challenging climate of the Island.

Cottage owners proudly display their treasured pieces of history and will share a bit about the background of their uniquely named cottage or their lanterns, if you only just ask. (I have also heard that residents who sell their cottages are asked to leave behind their lanterns so that the new owners can participate the following summer.  (I think it might be hard for me to leave all of mine if faced with the choice.))   One other aspect of this event that I love, is the tradition of having the oldest citizen of the campground – or one that has been honored that year – light the first lantern that lines the Tabernacle’s roof, signaling the cottages to do the same and light up their porches, roof tops and yards.

If you have a chance to view this event that can take you back to a simpler time, I’d highly recommend it.  If you’ve attended Illumination Night in the past and you feel as if its  “seen that, done that” I recommend taking  a different tack.  Instead of following the crowds around the Tabernacle, take the back lanes/paths and look at what I call the under-appreciated cottages, those that are not on the “main route.”   While everyone is focused on walking around the circle, you’ll find fewer people and often more creative displays.  (The pictures above, except for the top  two images in the right-hand column, were taken on some of the smaller, less visited paths.)

Do you have an annual event (summer or otherwise) that is meaningful to you, or encourages you to appreciate the simpler times?
Have you ever visited Illumination Night?  What did you think?  Is there a special house you always visit or a tradition you follow when you attend?  Share your story with me.

Additional facts/history about Illumination Night were obtained via the MVCMA website, the Cape Cod Online Blog and newspaper articles covering the annual event.